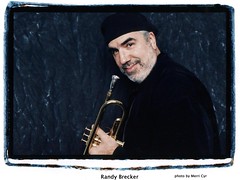 Today I publish an interview with the American trumpeter Randy Brecker, that I met on July 23rd, 2007 in Matera at the end of a concert in which he played together with saxophonist (and wife) Ada Rovatti and the Lucanian Big Band directed by Dino Plasmati.

During his career Randy Brecker won five Grammy Awards, mixing frequently jazz with different kinds of musical influences. He played with some of the greatest musicians of the Twentieth Century (among which Frank Zappa, Charles Mingus and Jaco Pastorius) and with the most famous rockers (Bruce Springteen e Dire Straits, among the others). Together with his saxophonist brother Michael (passed away on January 13th, 2007) he founded the Brecker Brothers, one of the most influent fusion band of the ’70s.

Below you find the podcast and a transcription of the interview.

How did you start to love music?

«My father was a piano player, and we had music in the family. It’s a very musical family».

How do you remember your first experience as professional musician?

«I don’t think I remember my first gig, but I was around fifteen, so it’s a long time ago, it’s 1955-1960. Maybe in Philadelphia was where I started to play, maybe with people like Lou Tabeking: he was a few years older than me, but we played together when we were very young in Philadelphia».

In the march of time you played with the greatest musicians of the world. I would be curious to know the working method of some of them. Let’s start, for example, from Horace Silver. How was working with him?

«It was very inspirational. He was a wonderful band leader: he wrote all his tunes, and translated his daily experiences, travels, relationships, etcetera, in the music. It’s just what I tried to do when I was writing music: it’s a part of my life, and all the writing was very close to what was going on with my life when I was younger. So I kind of use him as the role model. Still, till this day».

Another one… Charles Mingus?

«Well, Charles Mingus I don’t know very well, I only played on his last record, but I have a lot of respect for his trials and tribulations in life; he was one of jazz’s probably top-two greatest composers, and was fascinating me how much music he was able to write in a relatively short lifetime, all different styles: both Horace Sylver and Charles Mingus were the first fusion musicians – really – cause they fused a lot of different elements of music together. And saw no boundaries».

Another “fusion” musician was Frank Zappa…

«That’s true; he also I didn’t know very well, but he was also very inspirational. His main fusion was to fuse rock and classical, so he was a little different than the other musicians, although Charles Mingus also had a lot of classical music in his compositions too, but Frank Zappa was also very smart and very creative».

The last one is your brother Michael. The Brecker Bros had a great influence in the birth of fusion. I suppose working with him was easier…

«Was easy, yeah, we got along very well, didn’t have too many arguments, we didn’t have to talk about a lot of the things we did, since we came up together we had a lot of the same influences. So, when you play with the other musicians you have to talk about what to play, and how to work with the pitches, and vibrato, and certain inflections… We just kind of always knew what each other was doing, was a very tight knit musical relationship».

Now, you are playing together with your wife. How did you meet her?

«Well, in a gig similar to this, like ten years ago, in City of Mortano, wasn’t it?».

(Ada Rovatti): «Yes, we met in a situation similar to this one, in a big band in which I was working in the place where I used to live. I was just back form the Berklee and I was leaving to Paris: he came as guest, so we met in this way».

What’s your process for writing tunes?

«I don’t really have a process, I don’t really write too much anymore, but there was not really a process. I just sat at the piano, and worked at it everyday. It was kind of like a craft, I just put a giant puzzle together, and just sit there and come up with things: write it down, tape-record everything and just sit there and develop it. I never studied composition, or arranging, so I didn’t really have anything to go by other than really spending my time doing it: that was truly the whole secret, and just developing ideas, and constantly re-working ideas and eventually came up with something. I wish I had studied, because it probably would be easier now: it’s harder for me to do now, because I wrote so much when I was younger, and I just enjoy playing more and more – on the road a lot more – and I’m concentrating more on just playing the trumpet».

Anyway, you use to compose and to record travelling…

«Yes, I did, I not do that so much anymore because… It’s a good question… Number one: It’s hard to bring all the stuff on the road. I used to bring in the whole day a keyboard – a BIG keyboard – then there was a small keyboard, and now I just bring CDs to sell. I’m maybe more commercial… but it’s hard to say: I’ll probably get back to writing sooner or later cause I still enjoy it, but it’s so hard to explain, your life goes through different cycles. I’m just enjoying travelling and playing the trumpet more than I ever have. And I still like playing my old tunes, some new tunes, and slowly but surely I get material altogether».

In what context do you prefer to play: the small clubs or the big spaces?

«I don’t care, doesn’t matter, so it just depends on the sound is good, and the vibe is good. Some small clubs are great, some small clubs are horrible… some concerts are great, some concerts are horrible, just depends on the night. Tonight was nice to play outside, sometimes it’s… you know… The sound here was really good, that’s the whole thing».

The last question: what is your current and future plans?

«I just play. I have a project in the can, which I did in Brazil a couple of years ago with Brazilian musicians: that’s one project to try to get out the next year [“Randy in Brasil”, released in 2008 and Grammy Award’s winner – editor’s note]. I kind of want to do sometimes a ballads record, maybe with strings – I never did that – want to do some kind of dual project with Ada. The fourth thing I want to do – I don’t know how I’m going to fit this in – but I have a band with Bill Evans called “Soul Bop”: we want to do a studio record sometime. So, I will have a lot of work to do in the next couple of years, to figure out to do all this». 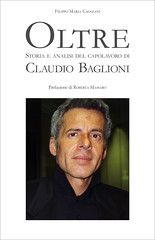